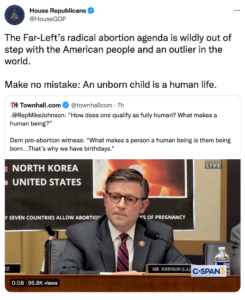 As America awaits the final Supreme Court opinion for the Dobbs v. Jackson Women’s Health Organization case, House Democrats held a hearing yesterday pushing their radical abortion until birth agenda. One witness, Dr. Yashica Robinson, could not even give an answer as to whether abortion up to the moment of birth should be legal or whether an unborn baby is a human being, even moments before birth. Another witness, Aimee Arrambide, answered affirmatively that men can have abortions.

THE FACTS ABOUT LIFE:

MAKE NO MISTAKE: Far-Left Democrats will stop at nothing, including intimidating Supreme Court justices, to push an agenda that is wildly radical, out of step with the American people, and an outlier on the world stage.