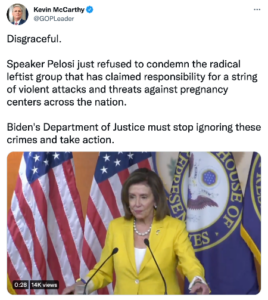 Today, Speaker Pelosi refused to condemn the 40 acts of violence and intimidation against pro-life individuals and organizations that have occurred since the leaked draft decision for the U.S. Supreme Court opinion on Dobbs v. Jackson Women’s Health Organization.

Following the leaked draft decision, radical pro-abortion groups proudly declared “open season” on pro-life crisis pregnancy centers. These centers are working to provide critical resources to pregnant women most in need, and it is deeply disturbing that Pelosi refused to condemn these deranged acts.

THE FACTS ABOUT LIFE:

MAKE NO MISTAKE: Far-Left radical Democrats are still working to intimidate and influence not only our highest Court, but any pro-life organization. House Republicans are demanding the Biden administration rightfully investigate these acts of vandalism and arson against pregnancy centers as exactly what they are: domestic terrorism.