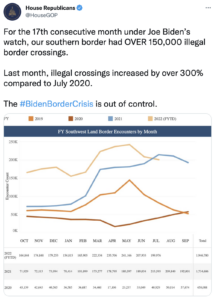 As President Biden returned from one more vacation, U.S. Customs and Border Protection (CBP) reported that our southern border had 199,976 illegal border crossings in July – an OVER 300% increase from the final July of President Trump’s administration.

This is now the 17th consecutive month under Joe Biden’s watch that our southern border has had OVER 150,000 illegal border crossings.