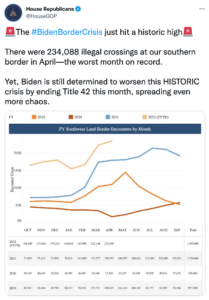 Joe Biden and House Democrats’ open borders, mass releases, and zero enforcement policies have created the worst border crisis on CBP record. According to U.S. Customs and Border Protection (CBP) data, there were 234,088 illegal crossings of our southern border in April alone, the worst month in CBP history. This is a 30% increase from 2021 and OVER a 1,200% increase from 2020.

BOTTOM LINE: This is an invasion. A country without secure borders is not a country. Border security IS national security.