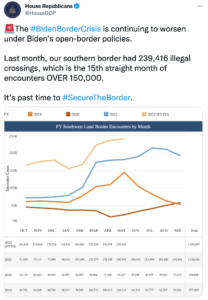 Joe Biden’s historic border crisis is continuing to worsen because of his reckless open-border policies. According to U.S. Customs and Border Protection (CBP) data, our southern border had 239,416 illegal crossings in May, which is the third straight month with the highest illegal crossings in over two decades and the 15th straight month of encounters OVER 150,000. This is a 32% increase from 2021 and OVER a 900% increase from 2020.

BOTTOM LINE: This is an invasion. A country without secure borders is not a country. Border security IS national security.