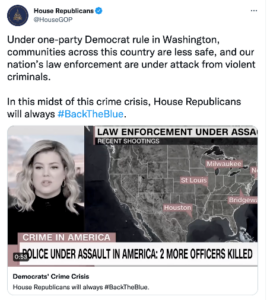 Following National Police Week, communities across this country are less safe, and our nation’s law enforcement are under attack from violent criminals due to the failed one-party rule of Democrats in Washington.

Now, ambush-style attacks on our police and homicides are up compared to this time in 2020.

MAKE NO MISTAKE: President Biden and Congressional Democrats’ efforts to demonize and defund our law enforcement along with Democrats’ soft on crime policies are to blame for this crime crisis. House Republicans will always stand with and invest in our nation’s law enforcement. Americans deserve law and order.