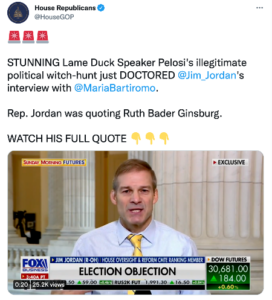 “Ruth Bader Ginsburg, the late justice, said this: ‘The ultimate date of significance is January 6.’ This is how the process works. The ultimate arbiter here, the ultimate check and balance is the United States Congress. And when something is done in an unconstitutional fashion, which happened in several of these states, we have a duty to step forward and have this debate and have this vote on the 6th of January.”