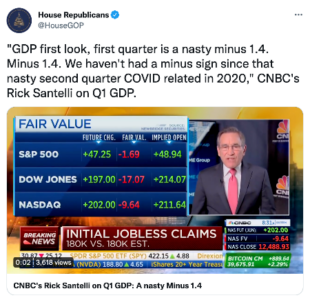 Joe Biden and House Democrats’ radical Far-Left policies and out-of-control government spending are driving the American economy off the cliff as proven by the real gross domestic product (GDP) rate for the first quarter of 2022.

According to the Bureau of Economic Analysis, America’s GDP decreased at an annual rate of 1.4% in the first quarter of 2022. This is the weakest showing since the pandemic recovery began nearly two years ago and falls well below economists’ expectations.