Nancy Pelosi’s illegitimate sham January 6th Committee secretly hired the former president of ABC News, James Goldston to be the secret producer for their shameless primetime hearings. This is the same producer who prevented the network from airing an interview with one of Jeffrey Epstein’s victims.

“James Goldston — former president of ABC News, and a master documentary storyteller who ran “Good Morning America” and “Nightline” — has joined the committee as an unannounced adviser…”

In 2019, “Good Morning America” reporter Amy Robach was caught on a hot mic claiming network brass scrapped her interview with a Jeffrey Epstein accuser to appease the Royal Family.

Leader Kevin McCarthy sent a letter to Goldston following this revelation, demanding answers for why the interview was scrapped and alleging that the network and Goldston “enabled” Epstein to continue his illegal conduct by not airing the interview and blowing the whistle on his sex trafficking ring.

“I am deeply concerned that this victim, in search of justice, went to ABC News, provided information and an interview, and then ABC News chose to bury the truth. This was a decision that Ms. Robach alluded was due to protecting powerful people or financial interests,” McCarthy wrote.

The appointment of Goldston to Pelosi’s witch-hunt is just further proof that this is nothing more than a disgusting sham aimed at distracting the American people. 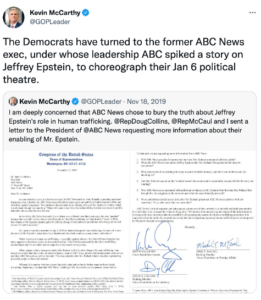