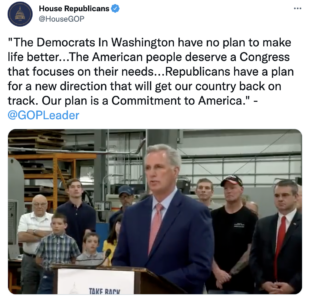 Tonight, President Biden is trying to change the narrative from his failures with distracting lies about the party not in power, Republicans. In his scathing prebuttal, Leader McCarthy highlighted the countless crises created by Joe Biden and House Democrats and demanded a change of leadership and values in Washington to ensure our nation can once again flourish.

MAKE NO MISTAKE: President Biden has brought nothing but chaos and despair for the American people. House Republicans offer hope with our Commitment to America.

On skyrocketing inflation caused by the reckless spending of the Biden administration and House Democrats, Leader McCarthy said:

“If you can find what you need at the store, it costs more – a lot more. Food prices are up more than 13%. The highest increase ever.”

“The historic spending binge of Joe Biden and his Democrat Congress has brought the greatest inflation crisis to this nation in generations.”

“For senior citizens, a lifetime of savings is being wiped out. Their 401k’s are now 201K’s. For our mid-career workers, wages are being ravaged. Young people cannot afford rent, not even to mention buy. Mortgages are now out of reach.”

“More than 20 million American households, that’s about one in every six families, have fallen behind on their utility bills.”

“If you had a constant salary for the past year, you’ve had more than one month of your income taken away. Millions of Americans are falling backwards into poverty.”

On the historic crisis at our southern border, Leader McCarthy said:

“At our southern border, our safety isn’t just at risk – our national security has been compromised. Joe Biden, Nancy Pelosi, and the Democrat Congress have created the worst illegal immigration prices in all the history of our country.”

“Our border is now wide open. Last fiscal year under Biden, there were nearly 1.5 million apprehensions at our southern border. Fact: that is a record. That includes 66 individuals on the terrorist watch list. You have to ask this question. Why are those on a terrorist watch list coming to America and what do they have planned for us?

“Criminal cartels are now in full control of our southern border. They decide who and what comes into our country, and that means record amounts of drugs flooding into our cities and towns. Every American city is now a border city.”

“Fentanyl is now the leading cause of death for Americans between the ages of 18 and 45. Biden’s open-border policies are killing Americans.”

“Because of the extreme soft-on-crime policies of Joe Biden and the ‘Defund the Police’ Democrat party, our Communities haven’t been this dangerous in decades.”

“Last year was the deadliest year in America in 20 years – that includes attacks on our police officers. And this year is no better. Democrat prosecutors and Democrat politicians have declared war on public safety.”

“Fact: gas prices are 60% higher than when Joe Biden took office. He inherited energy independence from President Trump but is now traveling the world begging foreign countries for energy to power our country.”

“We have God-given American-made energy we need right here right now. But Joe Biden has locked it away and raised the price of gas.”

“Our children are suffering as a result of Democrat school shutdowns. In fact, according to a national test results just released today, the pandemic has now erased 20 years of progress in reading and math proficiency. It is no wonder only 28% of Americans have trust in our public schools.”

“The Biden administration’s heavy-handed COVID policies, including firing our military heroes and our first responders, have undermined our freedoms and destroyed public trust. And what do we have to show for it? More Americans died under President Biden than under President Trump.”

“One year ago, our country watched in horror as Biden’s botched withdrawal in Afghanistan left 13 American servicemembers dead and landed a lasting blow to America’s prestige that will haunt us for generations to come.”

“Genocidal China grows stronger, bolder, and more aggressive by the day. Iran is closer to a nuclear missile than ever before. The world is more dangerous, more unstable, and more chaotic. Peace and Security have been replaced by hostility and aggression.”

“In a giant pay-off to our education universities that charge more but deliver less value, Biden unilaterally bailed out high-paid white-collar workers by transferring $1 trillion in student loans. That debt is now being paid by either people who’ve paid off their loans or never borrowed to begin with.”

On the fight to save the soul of America, Leader McCarthy said:

“What Joe Biden doesn’t understand is that the soul of America is in the tens of millions of hard working people, of loving families, of law-abiding citizens whom he vilified for simply wanting a strong, safer, and more prosperous country.”

“The soul of America is not the ruling class in Washington.”

“For the past 19 months, the Biden administration has been doing everything in its power to crush America’s soul. They force families to struggle to make ends meet.”

“They see their values, their country, their beliefs trashed in school, censured online, criminalized by the federal bureaucracy.”

“Democrats often say that America is a racist nation. They are wrong. We are a just,  noble nation. We are a Republic, devoted, however imperfectly, to the truth that all are created equal. We are the greatest country in the history of the world.”

On the REAL threat to American democracy, Leader McCarthy said:

“President Biden has chosen to demean and disparage his fellow Americans. Why?

Simply because they disagree with his policies. That is not leadership.”

“Never in modern times has an administration promised more and delivered less, and they have no one to blame but themselves.”

“Joe Biden and his Department of Justice labeled concerned parents that speak at school board meetings as domestic terrorists. That is an assault on democracy.”

“Joe Biden and the Democrats in Congress are hiring an army of 87,000 new IRS agents, more than the population of Scranton, Pennsylvania to do what? To snoop around your bank account, your Venmo, your small businesses. That is an assault on democracy.”

“Joe Biden’s government has shielded his family and his administration from accountability of abuses of power and foreign dealings of his son for personal gain. That is an assault on our democracy.”

“The Democrats in Washington have no plan to make life better.”

“The American people deserve a Congress that focuses on their needs. In November, our country faces a clear choice.”

“Republicans have a plan for a new direction that will get our country back on track. Our plan is a commitment to America.”

“We will defend American sovereignty and we will conduct rigorous oversight, check abuses of power, and hold all wrongdoers accountable, including our Department of Justice.”

“We will restore the soul of America.”