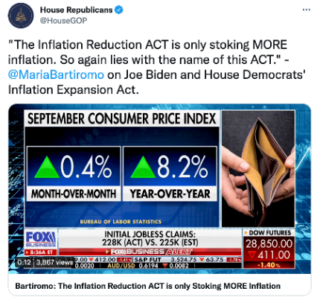 The Consumer Price Index (CPI), a key inflation index, came in “hotter” than expected at 8.2% for the 12 months ending September.

MAKE NO MISTAKE: Joe Biden and House Democrats’ Inflation Expansion Act has “stoked” America’s out-of-control inflation crisis, and they have NO plan to address it. Americans can’t afford Democrats’ policies, but we are certainly all paying for them. That is why House Republicans have created our Commitment To America to build an economy that’s strong for every American when we earn back the House.

Biden’s Inflation Tax is Crushing Families Across the Country