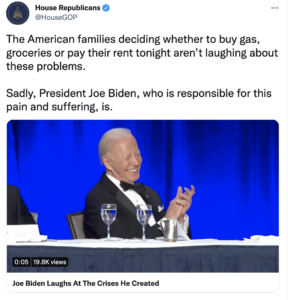 This weekend at the White House Correspondents Dinner, Joe Biden was caught laughing that Americans are paying more for just about everything because of his radical Far-Left agenda.

During the elitist event, host Trevor Noah highlighted how, ever since Biden “came into office, things are already looking up. Gas is up, rent is up, food is up, everything.”

MAKE NO MISTAKE: Inflation is a tax on ALL Americans. It is NOT a joke.