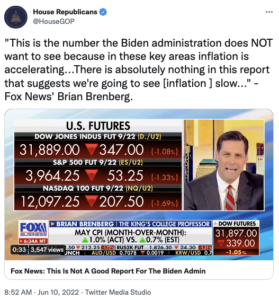 The Consumer Price Index (CPI), a key inflation index, hit its highest rate in OVER 40-years high in May. The CPI increased 8.6% over the past 12 months, its highest rate since December 1981.

MAKE NO MISTAKE: Inflation is a tax on ALL Americans, and it has steadily increased over the span of Joe Biden’s failed presidency. As inflation has continued to skyrocket, wages have actually DECREASED.