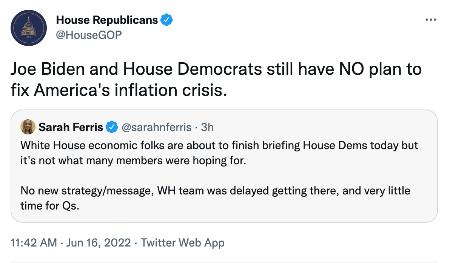 After a year of largely ignoring America’s economic crisis, House Democrats invited senior Biden White House officials to come to the Capitol today to brief their Members at a special caucus on how “to talk about economic messaging,” and it was a DISASTER.

Politico’s Sarah Ferris reported that the meeting was not what House Democrats were hoping for and that the senior Biden officials provided “no new strategy or message,” adding the officials delayed getting there and had very little time for questions.

MAKE NO MISTAKE: If House Democrats were serious about combating America’s economic crisis, they would have invited House Republicans to speak to them, not the Biden White House officials who called inflation “temporary” and a “high-class problem.”Unlike the Biden administration and House Democrats, House Republicans have real solutions to fix America’s economic crisis, which has been caused by Biden and House Democrats’ Far-Left agenda and out-of-control government spending.