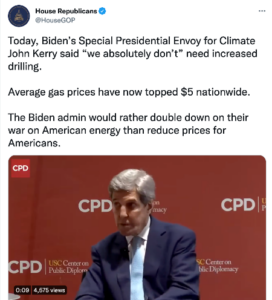 Sadly, House Democrats are in lockstep with this administration’s failed Far-Left agenda. Yesterday, they blocked House Republicans’ American Energy Independence From Russia Act for the SEVENTH time, which would unleash American energy dominance to drive down prices.

WHAT BIDEN SHOULD BE DOING: