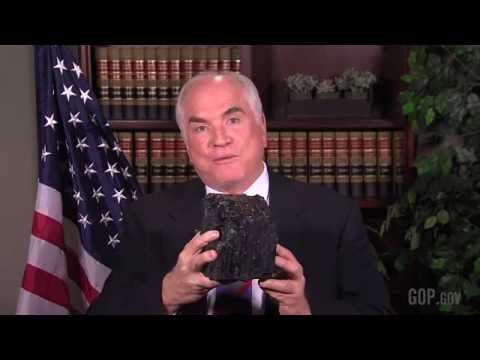 This week, Representative Mike Kelly (R-PA) delivers the Republican Address. In his message, Rep. Kelly focuses on the importance of developing all forms of American energy for the sake of spurring job creation and robust economic growth.

Not because he’s been bad this year – though I’ll get to that.

No, I’m offering the president a lump of coal because this product right here holds the potential for a 21st-century economic revival.

You see, coal is our most abundant and valuable resource.  It lights our homes, it keeps our electric bills low, and puts food on the table for countless families.  More than 40,000 jobs in my state alone are tied to coal.

But this isn’t just about coal country – no, it’s about our whole country.

Because no other nation in the world has been blessed with such abundant, affordable, and accessible resources.

And with all God has given us, we shouldn’t be just trying to keep up with the pack; my goodness, we should be leading the world.

If only we had a president willing to seize this opportunity.

He tells us he’s for ‘all of the above’ but then he leaves out everything that’s below.

The president said he would bankrupt the coal industry, and he’s spent his presidency trying to do just that.  Federal regulations have already forced two coal-fired power plants in my district to close over the past two years.  And hundreds more are set to shut down around our country.

He’s put up so many roadblocks to American energy that all our production is coming from state and private lands.

Even when the president’s own party stopped him from imposing his cap-and-trade tax, he said it was ‘just one way of skinning the cat’, and then he directed the EPA to do his bidding for him.

Instead of forcing our workers to live with less, the president should let us use our God-given resources and talents to help Americans get back to work and make our nation the energy superpower it can be – and quite frankly, that it needs to be.

So, whether it’s stopping these regulations, expediting infrastructure, or expanding production, there’s so much more we can do to encourage the development of all forms of American energy.

These just aren’t Republican solutions – these are common-sense, American ideas that have support in both parties.  You’re going to see them again in the new Congress, starting with a vote to approve the Keystone XL pipeline.

Because manufacturing things, making things – and doing it better than anyone else in the world – that’s what America has always been about.  That’s how we’ve built such a robust and dynamic economy.  If we pull together, we can make 2015 the year we restore our nation of builders.

But that’s next year…

Right now, we are getting ready to celebrate Christmas.  As we do, I hope you’ll set aside a moment to remember all those who gave their lives this year for the cause of freedom, and pray for those spending this holiday season away from their families and loved ones.

Merry Christmas everyone, and may God continue to bless the United States of America.