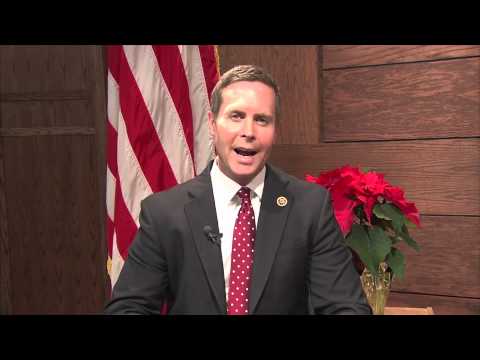 Happy New Year, everyone.  I’m Congressman Rodney Davis from the great state of Illinois.  I’m honored to be speaking with you from Springfield, the home and resting place of one of our greatest presidents, Abraham Lincoln.

On Tuesday, we begin a new Congress, and that means a new start on the people’s business.  If we work together, we have a great opportunity to grow our economy and put our nation on solid footing for a bright future.  That’s why the House will start off with jobs bills that have bipartisan support but were never considered by a Democratic-run Senate.

One of those initiatives is a bill I’ve sponsored called the Hire More Heroes Act.  What this bill does: it makes a commonsense change to the president’s health care law that will encourage small businesses to hire more of our nation’s veterans.

You see, one problem with the health care law – one of many – is that because of its costs and mandates, small businesses face higher costs and have to hold off on hiring.  When small businesses – the engine of our economy – can’t hire, we can’t move forward.

That’s where the Hire More Heroes Act comes in.  This bill exempts veterans already enrolled in healthcare plans through the Department of Defense or the VA from being counted toward the employee limit under the health care law.

So not only are we providing small businesses – and our economy – with much-needed relief, but we’re also helping more of our veterans find work.  Because despite receiving the best training in the world, post-9/11 veterans are consistently faced with higher unemployment rates than that of other veterans.   As more and more of these men and women return home, the Hire More Heroes Act will give them a better chance in a still-tough job market.

The Hire More Heroes Act is an example of the kind of bipartisan jobs bills the House will be bringing up on your behalf.  In the coming days, the House will also act on legislation to approve the Keystone XL pipeline, and to restore the 40-hour workweek for middle class families.

From there, more good ideas for jobs and growth will follow.  If the president is willing to work with us, we’ll have a real chance to address our nation’s most pressing challenges.

There’s one more thing I want to tell you about the Hire More Heroes Act.  This idea didn’t come from Washington; it came from right here in Illinois.  Brad Lavite, the superintendent of the Veterans Assistance Commission in Madison County came to me after seeing how unemployed veterans and servicemembers were having a difficult time navigating the new health care law.  Then we got started on this and other ideas to help

Listening to the people and making your priorities our priorities: that’s what you can expect from this new American Congress.  If we all unite and work together, 2015 will be a great year for our country.

For now, thank you for listening.  God bless all our veterans and servicemembers, and God bless the United States of America.