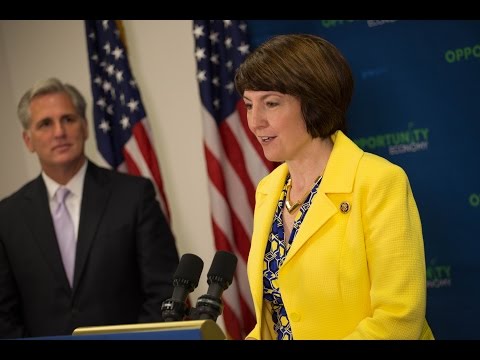 “The American people deserve an efficient and accountable government, and this is Congress’s opportunity to assert oversight on the administration’s runaway spending.”

“Good morning – I hope everyone enjoyed their Memorial Day week! For me, it was great to be home in Eastern Washington, where I had the opportunity to talk with many of our veterans, some thriving small business employees, and a few really impressive tech start-up entrepreneurs that are transforming the Pacific Northwest. It reminded me that the greatest transformations in this country all start with people. And it begins by empowering them.

“That’s why this week we’re voting on legislation that keeps our economy moving, our communities safe, and our federal government accountable to priorities of the American people. House Republicans have a 21st century approach to the appropriations process. The American people deserve an efficient and accountable government, and this is Congress’s opportunity to assert oversight on the administration’s runaway spending.

“Congress has the power of the purse, and this is our opportunity to use it in a way that helps the American people. Through the policy directives outlined in this week’s legislation, we will be able to ensure that we are eliminating waste, fraud, abuse and inefficiencies across the board. I’m thankful to have  my Washington state colleague, Mr. Reichert, here with us today to talk about his perspective as a former law enforcement official on the impact these appropriations have on the safety of the American people.”