This Friday, federal workers will miss a second paycheck due to Democrats’ continued refusal to negotiate an end to the government shutdown.

This is not what House Republicans want. Time and again, we’ve attempted to negotiate a deal that secures the border, addresses the humanitarian crisis, and provide federal workers with the paychecks they have earned. Each attempt has been met with rejection from House Democrats (even before they’ve heard the actual details of an offer).

Last week, we voted for an MTR that would have paid the federal workers, including those who were furloughed, through January 15th. That would have provided them their first paycheck of the year. 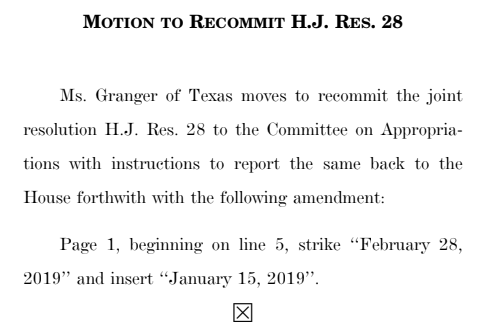 Unfortunately, only six Democrats crossed the aisle to join us in supporting these workers. The rest of their caucus voted no, opting to deny them their paychecks while they continue to refuse to negotiate an agreement to end the shut down and secure the border.

We could reach an agreement in a single meeting if the Democrats would come to the table.  They should stop playing politics with the nation’s security and the livelihood of our federal employees.