Rep. Sensenbrenner weighs in on impeachment on CBS THIS MORNING

F. James Sensenbrenner, Jr. (Jim) represents the Fifth Congressional District of Wisconsin, which includes parts of Milwaukee, Dodge, and Waukesha counties, and all of Washington and Jefferson counties.

Jim was born in Chicago and later moved to Wisconsin with his family. He graduated from the Milwaukee Country Day School and did his undergraduate studies at Stanford University, where he majored in political science. He later earned his law degree at the University of Wisconsin-Madison.

After serving ten years in the Wisconsin State Legislature, Jim ran for the United States House of Representatives and was elected in November 1978.

Jim currently serves on the House Committees on the Judiciary and Foreign Affairs. He is the ranking member of the Subcommittee on Antitrust, Commercial and Administrative Law, and serves on the Crime, Terrorism, Homeland Security and Investigations; Africa, Global Health, Global Human Rights, and International Organizations; and Europe, Eurasia, Energy, and Environment subcommittees. He was previously the Chairman of the House Science Committee, where he solidified his reputation as an independent leader on science-related issues and oversight.

Throughout his public life, Jim has been at the forefront of efforts to preserve the sanctity of life, eliminate wasteful government funding spending, and protect the interests of American taxpayers. He has regularly been cited by the National Taxypayers Union as one of the most fiscally responsible House Members and is well known for completing his financial disclosure forms down to the penny.

Recently, Jim has been a leader in the bipartisan, bicameral push to reform America’s broken criminal justice system. From his sponsorships of the Due Process Act and the Second Chance Reauthorization Act, Jim’s efforts have focused on changing the way evidence is collected and analyzed, defending innocent Americans against a bloated criminal code, and protecting citizens’ property rights.

Jim is a serious legislator that has tackled many of the most significant issues facing this nation, and his many legislative achievements have shaped the direction of our country.

Shortly after the attacks of September 11, Jim introduced the PATRIOT Act in the House as a method to help keep America safe by enhancing the tools our law enforcement officials could use to thwart another terrorist attack. President George W. Bush signed the PATRIOT Act into law in October, 2001. Following revelations of the National Security Agency’s bulk collection of data and the misinterpretation of Section 215 of the PATRIOT Act, Jim authored the USA FREEDOM Act – bipartisan, bicameral, and comprehensive legislation to rein in abuse, put an end to bulk collection, increase the transparency of the Foreign Intelligence Surveillance Court, and ensure the proper balance between national security and privacy is struck. The USA FREEDOM Act was signed into law May, 2015.

He was instrumental in the passing of the Child Abduction Prevention Act, which President Bush signed into law in 2003. This law enhanced the AMBER Alert system, strengthened penalties against kidnappers, and aids law enforcement in protecting children.

He also introduced the Adam Walsh Child Protection and Safety Act. This Act, which is now law, expanded coverage of the national sex offender registry, mandates the collection of DNA from sex offenders, and forces states to comply with strict requirements to keep the information of sex offenders current.

Throughout his tenure in Congress, Jim has fought to protect the gains made during the Civil Rights Movement. As Judiciary Committee chairman, he introduced the reauthorization of the Voting Rights Act (VRA), the Fannie Lou Hamer, Rosa Parks, and Coretta Scott King Voting Rights Act Reauthorization and Amendments Act of 2006. After approximately 20 hearings, the measure passed with overwhelming bipartisan support. However, the Supreme Court struck down a key provision of this law. After, Jim introduced the Voting Rights Amendment Act of 2014, a bipartisan, bicameral modernization of the original 1965 law that ensures Americans’ most sacred right is protected.

In 1977, Jim married Cheryl Warren of Green Bay, Wisconsin – a staunch advocate for the rights of the disabled. Together, they have two adult children, Frank and Bob, and one grandson, Kevin. In his free time, Jim enjoys watching the Green Bay Packers and reading. 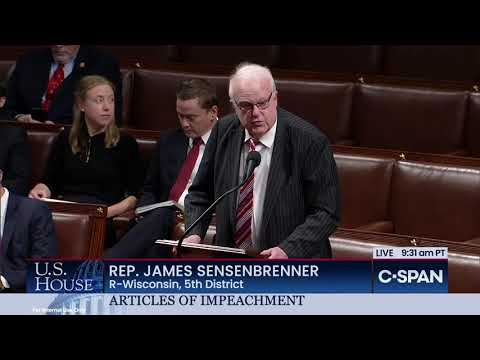 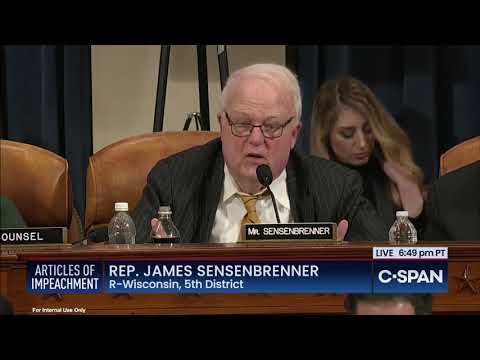 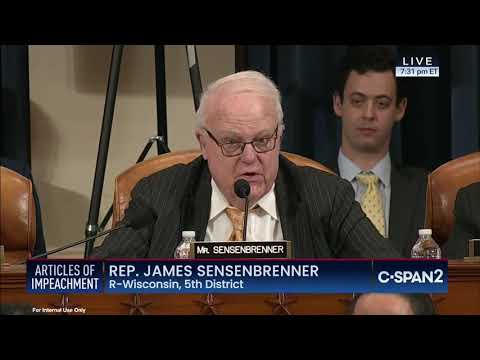 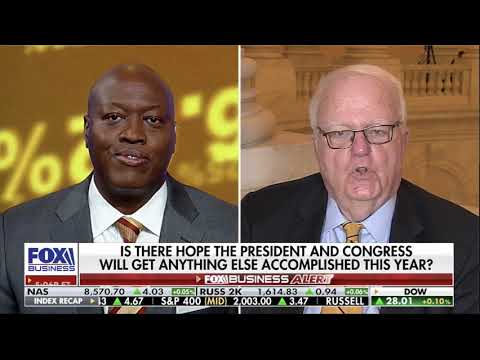 The #USMCA trade agreement goes into effect today! I’m proud to have supported this historic agreement. This new tr… https://t.co/dfEEhUIycN

Rep. Sensenbrenner calls for cooperation in removing police officers with misconduct on their records. “The sooner… https://t.co/7836TbDjYK

As the former chairman of the House Science Committee, I would like to congratulate @NASA & @SpaceX on a successful… https://t.co/7Cb34dn2yM