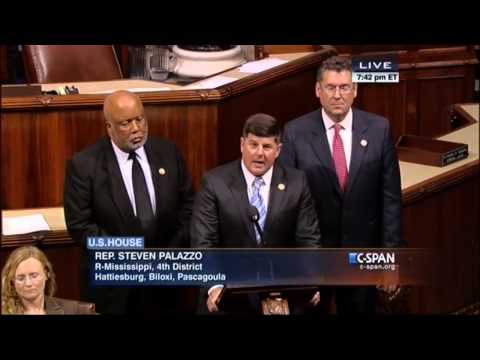 This week, as our nation observes National Police Week, we recognize the bravery, fortitude, and sacrifice demonstrated by police officers nationwide. They put their lives on the line to defend our communities and our citizens against criminals and thugs.

As many of you are aware, last Saturday, May 9, 2015 in Hattiesburg, Mississippi, two police officers were killed in the line of duty: Officer Benjamin Deen and Officer Liquori Tate. The City of Hattiesburg and the Great State of Mississippi have suffered the loss of two of our own, two family members, protectors and defenders of our Constitution and laws. Over the last week, Mississippians and law enforcement officials nationwide have been gracious in lending their prayers and support to the families of these two young men, to the Hattiesburg Police Department, and to the community for their loss.

Benjamin Deen was a thirty-four year old loving husband and father of two. He was a K-9 officer and had a strong bond with Tommy, his K-9 counterpart, who also became a beloved member of the family. Liquori Tate was twenty-five years old, serving his first year on the force after graduating from the Hattiesburg Police Training Academy in June of 2014. He was fulfilling his lifelong ambition to serve his community in a policeman’s uniform.

Both of these men were upstanding individuals, assets to their police force, and exemplary role models within the community. They were not only exceptional citizens and neighbors; they chose to live a life of service and put themselves in harm’s way in order to protect others.

A routine traffic stop gone wrong resulted in the death of two of Hattiesburg Police Department’s finest officers. It’s unfathomable as to how and why this tragedy occurred.

We live in the greatest nation there is, where we are afforded freedoms that seem inconceivable to many people around the world. Those freedoms are laid out for us in our Constitution, which guides our land and the laws by which we live. Citizens in this country choose by their own free will to serve and protect our nation both at home and abroad. Police officers are among those who go to work each day and risk their lives to ensure the laws we live by are upheld for the betterment and protection of our families, communities, and our great nation.

I ask that you take time this week to thank your police officers and keep them in your prayers as they fulfill their duties each day. I am more than grateful for our law enforcement officers and their service around this country. And I will never forget the lives and sacrifice of Officer Benjamin Deen and Officer Liquori Tate.