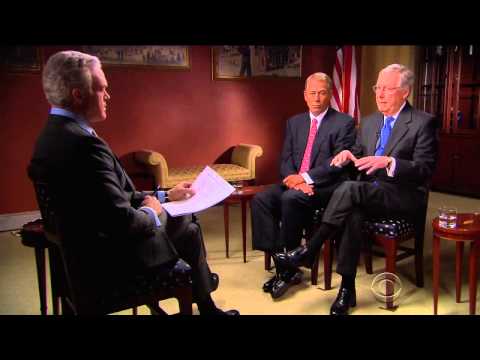 Yesterday Speaker of the House John Boehner and Senate Majority Leader Mitch McConnell sat down with Scott Pelley on CBS’ 60 Minutes. It was their first joint interview of America’s New Congress — their first interview since huge Republican gains in November.

Here are 6 notable quotes from the 13+ minute interview:

On his thoughts on the President’s State of the Union Address:

McConnell: “It sounded like he was running for a third term. He seemed to have completely forgotten or chose to ignore the election last November. He was looking out at an audience that had 80 more Republicans in it than his first State of the Union.”

On having to sit directly behind the President during his State of the Union Address:

On the improving economy and if some of the credit should go to President Obama:

McConnell: “Things are getting better. But the point is, who is benefiting from this? This has been a top of the income recovery. The so-called 1% that the President’s always talking about have done quite well. But middle and lower income Americans are about $3,000 a year worse off than they were when he came to office.”

On the prospect of raising the federal minimum wage:

Boehner: “It’s a bad idea. I’ve had every kind of rotten job you can imagine growing up and getting myself through school. And I wouldn’t have had a chance at half those jobs if the federal government had kept imposing higher minimum wage. You take the bottom rungs off the economic ladder.”

On the President acting unilaterally to  to protect five million illegal immigrants from deportation:

On whether the country is divided:

McConnell: “We’re not divided on our love for and support for the country. We have very different views, as Adams and Jefferson did, about what america ought to be like. and we resolve that through the democratic process. And so, I would not view with alarm the fact that there are robust debates going on in congress over the future of this country.”