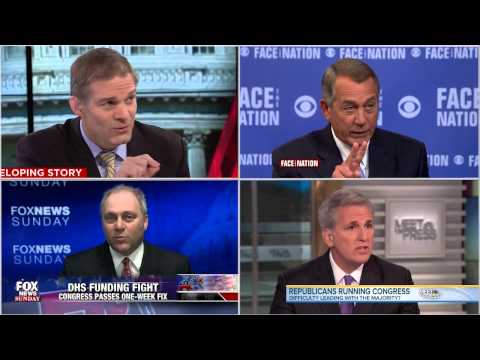 The President said 22 times he didn’t have the authority to act unilaterally on immigration. We agree.  President Obama’s executive action is not only an overreach of his power, but it is a direct disregard for the will of the American people, which is for their elected leaders – Democrats and Republicans – to work together on smart, common-sense solutions.

For weeks, Senate Democrats have stood in the way of a vote on the House-passed bill that both funds the Department of Homeland Security and holds the President accountable.

Watch and read below for what House Republicans had to say this weekend:

“The President took actions with regard to immigration that were far beyond what the law allows him to do. You have to remember, John, that the president said 22 times – 22 times – that he couldn’t do what he eventually did.

“Let’s go to conference, because even Harry Reid said last year, that’s the way for the last 200 years we settle our differences. We avoided a cliff. They created one.

“This President has created this frustration. And remember, you see a frustration in the House. That is reflective and representative of the frustration in our districts. This President doesn’t want to work with the American public. He’s creating these problems when we’re trying to work it out. The best thing that can happen is we go to conference, and we settle our differences.

“We have a difference of opinion in strategy and tactics. But in principle we are united. We’re united in the principle [that] there’s a right way and wrong way to legislate. Unfortunately, the president chose the wrong way.”

“What we did was pass a bill that now forces the Senate to vote on going to conference. We actually passed a bill that pushes back on the President’s illegal action on immigration. They made changes to that bill that we don’t like, so the way Congress works is, when the House and Senate have a disagreement, you go to Conference.

“Let’s go to conference and work out our differences and finally put a check on this President that he himself said 22 different times: he doesn’t have the authority to write his own immigration policies. We’re going keep fighting this battle.”

“Obviously, our members have a lot of difference about how we want to go about tactics, but our goal is the same. Our goal is to fight this President’s illegal action, and we’re now in a position to force the Senate to go to conference.”

“I believe it’s very important that we continue to hold this president accountable and that’s our priority — that’s been our priority in the House. And we passed a very strong bill to do that,” she said. “We need to be working with our colleagues in the Senate. That makes us stronger.’”

“We’re willing to sit down and try to work out the differences. That’s all we’re asking for.”

“Now, all we are saying: it’s let’s go to conference committee… we know how it works, we passed something, they passed something, now we go sit at a table and work out our differences. What’s wrong with that process?”

“Remember, what caused all this: When the President last November did something he said 22 times before he wouldn’t do, and then he turned around and did it.”

“We’re willing to sit down and try to work out our differences. That is all the House has asked for.”